Copies of the application form for admission to the School during the 19th century still survive, and the nature of the questions for those seeking admittance – and the rules imposed once a member of the school, give a clear sense of the power dynamic.

Each pupil to be distinguished by a particular number.

Participation at the school hugely expanded the life chances of blind people with no money – but residents gave up many freedoms normal for the majority of the population.

‘Application queries to be answered by a medical gentleman’

‘Application queries to be answered by a clergyman’

Rules for the conduct and management of pupils

The rules also state that if a resident at the School needed surgery, it could only be carried out with permission of friends or family – the pupil themselves had no say.

Caroline France was born in 1905, and applied to join the School for Children at Wavertree in 1918. The questions still include ‘has the applicant ever begged, or been used for the purposes of begging?’ 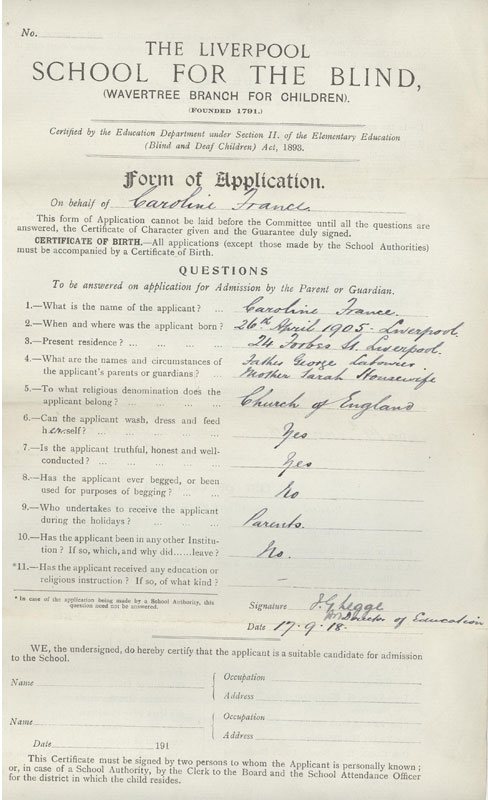 Application for the Liverpool School for the Blind, 1918. MMM.1994.37.2 in the collection of the Museum of Liverpool, National Museums Liverpool

Thanks to Amy Evans and Pat Hayes who wrote the audio description, and whose research and words underpin this blog.