History of Place recently held four digital game making workshops at the Museum of Liverpool for members of the public. 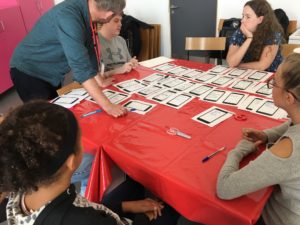 The workshops were intended to further develop the Liverpool based mobile phone game that students at St Vincent’s and young people at Centre63 had already started to make. They were lead by John Norton from Give it a Name http://www.giveitaname.net/ who is working with us to develop games at four of our eight sites. 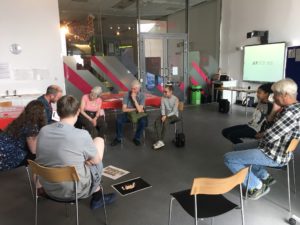 The Liverpool game focuses on Edward Rushton, one of the founders of the Royal School for the Blind, Liverpool. As the first ‘school’ for blind people in Britain, second in the world after the Paris school, it was a huge achievement that the founders raised the funds and encouraged enough support for the scheme to succeed. Edward Rushton is credited with coming up with the idea of a charitable haven for blind people with other founders raising the funds, seeking support and developing the mechanical arts and music curriculum. The school opened in 1791.

Edward Rushton had an adventurous life! Born in 1756 at age 11 he joined Messrs Watt and Gregson, a shipping firm that traded in the West Indies. During his time at sea he befriended the enslaved on the ship, was involved in a shipwreck where an enslaved man saved his life and contracted a disease which resulted in him becoming blind. He returned to Liverpool aged 17 as a blind man and without money or prospects. During his life he was a pub landlord, editor of a newspaper and a bookseller. He was outspoken about human rights, particularly regarding enslaved people, and used his poetry as an outlet for his campaigning. Rushton underwent surgery to restore his vision, at a time when anaesthetic hadn’t yet been invented, ouch! His legacy lies in his radical campaigning, his fearless attitude and his instrumental role in establishing the school. 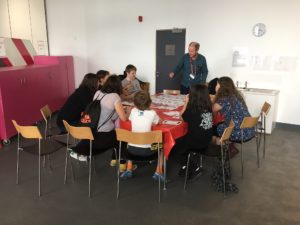 Using the historical facts as a backbone for the game we explored potential plot twists, characters, myths, fears, mini games and prizes. The young people and their grown ups involved in the workshops had brilliant ideas for the game. They named Rushton’s captain ‘Captain But’ and ‘Captain Drumf’ and said that Rushton‘s enemies called him ‘Soft Teddy’ and ‘Mashed Ted’! Some riddles were shared with the group: ‘What goes up but doesn’t come down?’……..your age! Some participants suggested some of the game could be played with a blank screen with audio or motion only so that you play the game from Rushton’s point of view. At one point in the story a kraken appeared!

The ideas the groups had for the game exceeded my expectations and i’m so excited to continue developing the Liverpool game.