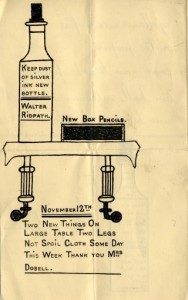 In 2013, the University of the Third Age (U3A) carried out a study in collaboration with Langdon Down Museum “to augment its historical database on how Normansfield operated and the people it cared for.” History of Place has been granted permission through the generosity of U3A and Langdon Down Museum to reproduce some of the results of that research. This is the forth of those case studies, and the second taken from the later years of Normansfield Hospital, up until its closure in 1997. The text below is taken directly from the U3A research pages of the Langdon Down Museum of Learning Disability website. 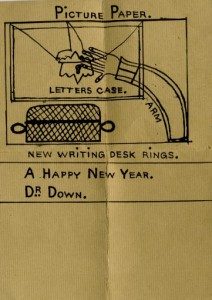 Walter Ridpath was born in 1848 into a large family in the City of London,where his father was a merchant. He was admitted to the Royal Earlswood Asylum in 1862 aged 14 and discharged three years later. He then lodged with the Turner family for 13 years, but when Mrs Turner ceased caring for him he returned to institutional care. Walter become one of the patients who followed Dr John Langdon Down from Earlswood and was admitted to Normansfield in 1882. 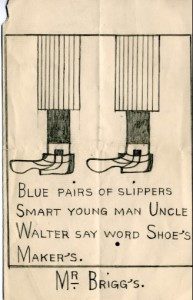 Ridpath was diagnosed as ‘healthy’ apart from suffering from epilepsy and is described as a ‘congenital idiot’. He was termed an ‘imbecile at birth’.

The ‘Commissioners in Lunacy’, represented by two doctors, added the following statements:

“Facts indicating insanity observed by myself; there is no coherence to his discourse – he pronounces words with hesitation but correctly. He is however incoherent on all subjects. He needs to be accompanied when he walks out and indoors. He requires general supervision. He amuses himself in writing in which he is in many ways proficient, and he also occupies himself in needlework.. Donald Mackintosh, physician.”

“He (Ridpath) is extremely childish – has exalted notions concerning himself and his own affairs and is capable of doing little that is useful or purposeful. Answers are meaningless and actions are those of an imbecile. He… is inclined to mischief – very peculiar in his habits. Writes his name in every possible place. Dr Francis Perry.”

The first entry in the patient’s casebook is a little more optimistic and somewhat kinder to Walter:

“Formerly a patient of Dr Down’s at Earlswood, he is a well grown lad. He has little epileptic fits but has not had any lately. He speaks indistinctly and with broken sentences. He can read a little and writes very well, but writes in the broken way in which he speaks. He… is precise in all his ways. He is clean in all his habits. There is no insanity in his family.” 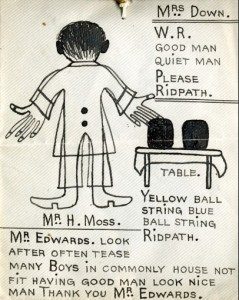 The Langdon Down Museum archive includes a number of letters from Walter to John Langdon Down – the only example of direct correspondence between Langdon Down and a patient. Walter sends neatly printed requests to Dr Down and addresses him affectionately, calling him a ‘good man’ and signs them ‘with Walter’s love’. Walter also frequently refers to himself as a ‘good quiet man’.

Walter’s handwriting is exquisite and he produces realistic drawings of his experiences. In one letter he recalls a trip to the dentist, referring to ‘mouth sweet’ and ‘new tooth good’, along with sketches of teeth after the visit. However his correspondence is disjointed and occasionally inexplicable.

In some of his writing he refers to being teased and bullied, and in 1883 his brother wrote to Mary Langdon Down reminding her that Walter was of a sensitive disposition and asking that he should be kept away from teasing as much as possible.

There are letters to Mary Langdon Down from all Walter’s siblings, with whom he was obviously able to enjoy quite a few seaside holidays away from Normansfield.

Walter remained happily at Normansfield until his death from pneumonia in 1909 at the age of 61. The length of his life reflects well on the care received by Walter and the many other patients who lived for years at Normansfield under John Langdon Down’s supervision.

Adapted from ‘Tales of Normansfield: the Langdon Down Legacy’ by Andy Merriman