From 1892 – 1928 Chiswick House was run as an asylum by the Tuke brothers, and was one of the more enlightened institutions at the turn of the 20th century. We ran an art workshop as a creative response to this history. 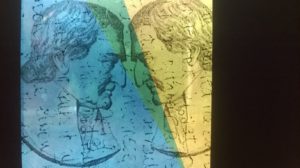 The workshop was run in partnership with Outside In (Pallant House Gallery), Richmond Arts Service and Orleans House Gallery. The two artists leading the sessions,  Kate Simms and Lynne Firmager, were from the Outside In ‘Step Up’ programme. This programme works with artists who identify as having mental health issues and provides them with training and ongoing support to enable them to lead creative sessions in a variety of settings. 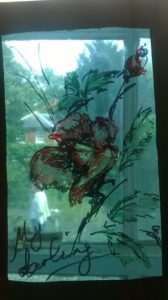 Magic lanterns and cyanotypes, which would have been popular around the time of the Tukes’ practice at Chiswick House, were regular Victorian/Edwardian leisure pursuits. Keeping the patients at Chiswick fully occupied was one of the main objectives of the doctors, as part of their therapeutic approach to treating patients with mental health issues.

The magic lantern images were made using a combination of coloured acetate and/or tissue, acetate printed with images from the archive research and hand drawing. The cyanotypes were made using special light sensitive paper, foliage from the kitchen garden at Chiswick and what sunlight was available on a rather cloudy day! 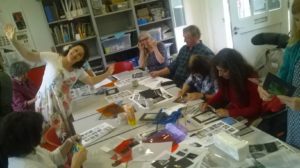 I’m part of the ‘Chat and Draw’ group from Orleans House Gallery. I’ve been going to OHG for about two to three years now. It combines three things for me. One is art, one is socialising and since we’ve been doing these visits, it gives you a historical perspective. Because OHG is being renovated this year, we’ve been going here and there, to lots of different places.

I never realised that Chiswick House had been an asylum in the past, even though I’ve visited many times before. The periphery of London is just full of places like this, where in the past they would have moved patients out of the city to recover or recuperate.

This is our latest port of call! I’ve been to Chiswick House before but I’ve never seen this bit. It’s really interesting and of course, to be doing these activities while we’re here. I never realised that CH had been an asylum in the past, even though I’ve visited many times before. The periphery of London is just full of places like this, where in the past they would have moved patients out of the city to recover or recuperate.

In terms of mental health, things have changed but there is definitely still a stigma attached to it. It has changed in my lifetime but there remains a stigma around mental health and disability. This session has been good because it has made us aware that there is a history attached to these issues. Also, everyone, I can guarantee everyone in this room knows either a friend or family member who has had mental health problems. It’s interesting to think about how language has changed and what would not now be acceptable to us and also, how people have been treated in the past. We visited Langdon House and that was very interesting too.