St. Saviour’s Church was one of the first purposely built to cater for a deaf congregation. People came from all over London and further afield to use it. It was not only used for baptism and religious services but acted as a social centre for the congregation to chat and share life experiences. You can read more about the history and timeline of the church here, first at Oxford Street and then from 1925 at a new building in Acton. 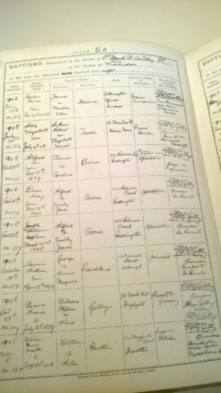 Page 20 of the baptismal records for St Saviour’s Church

In the 1920s, when the church moved to a new building in Acton, the outbuildings included space for a kitchen, refectory and billiard room for socialising.

I have been carrying out research both at London Metropolitan Archive and the National Archive to uncover some of the names and life circumstances of early members of the deaf church. Many came as families, and the church had links to other deaf institutions. I hope these leads will be useful to other researchers interested in discovering more about the lives of these families.

When one member of a family (usually a parent) was deaf, most if not all of their extended family were baptised at the church. The Baird, Carter and Bone families, whose names turn up in the archival records, all followed this pattern.

Florence Baird grew up in Hackney whereas her husband William was born in Belfast, Ireland, so she is the most likely to have made the initial connection to St Saviour’s. William is described in the record as ‘deaf from childhood’ and Florence ‘deaf and dumb’. Neither were baptised in the church, but all their children were.[1]. 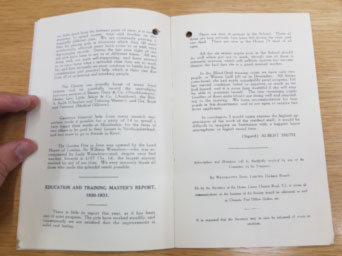 The Education and Training Master’s Report 1930 – 31, found in the 80th Annual Report of the British Home for the Deaf and Dumb.

Charlotte Carter was originally from Yorkshire, and her husband Charles (Chas.) was born in the London area [2]. The Carter family is interesting in that they did not have all their children baptised. According to the 1891 census, they had three children, Joseph John, Charles Henry and Edward A, of which, Edward is not in the baptism records at around the time that his brothers, Joseph and Charles were baptised [3]. Both Charles and Charlotte are described as deaf and dumb.

It is also notable that Charlotte was ‘Head of the Family’ in the 1891 census when her marriage status was “Mass” (or similar). Could this mean that Charles had to go away for work and she took charge of the house, or did he pass away in or around 1891 and they had not taken that into account when the census was completed?[4].

In the baptismal records it seems like Albert Bone, the head of his family, got baptised at the church in 1908, long after some of his children got baptised in and around 1890.

Also in the baptism records was something called a ‘conditional baptism’.This took place when people could not remember if they had been previously baptised or if there was doubt whether a previous baptism was valid, and had the same implications as the one they were about to receive. The church performed multiple conditional baptisms, usually on adults.

Reverend Samuel Smith seems to have worked across three institutions: he was employed by RADD and he performed baptisms at St. Saviour’s Church. He was also Chaplain Superintendent at the British Home for Deaf and Dumb Women. He was the Chaplain-Superintendent at RADD but was mainly posted out to the home as the ‘Education and Training Master’. He would write up reports on how the women were progressing in training then conclude whether they were self-sufficient or not.

The British Home for Deaf and Dumb Women was established in 1851 “to train women and girls so as to enable them, if possible, to earn their own living” and “to provide a home for destitute deaf women who, from age or infirmity, are unable to support themselves”[5]. Some of the women who went to this institution were baptised at St. Saviour’s Church either because it was necessary to for their training or that they requested it.