Accentuate History of Place is seeking London based workshop participants, aged between 15 and 30 years old, interested in gaining skills in film making by taking part in workshops held over four days, from 23rd – 26th October 2017.  The aim is to create a short film which tells the story of St Saviour’s Deaf Church, Acton, its congregation and social club members, using archive material, photos and filmed interviews as inspiration. 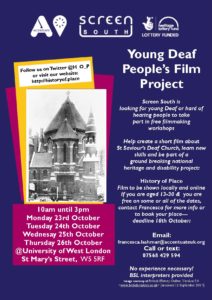 We are looking for young people with a lived experience of being D/deaf or hard of hearing who would like to be involved in telling the story of their own heritage.   There will be opportunities to storyboard, script, edit, act, film, direct and also to learn about making film accessible to all by building in subtitles, audio description and, of course, BSL in a creative way.

You will be working with an award winning film making team and gaining new skills as well as helping us make a film which will reach a large and diverse audience.